Who got the social media news video scoop on Notre Dame?

As reports of the fire engulfing Notre Dame rolled in on the evening of 15th April, the world’s attention centered on Paris and its famed cathedral.

Dramatic images of the collapsing tower were splashed on newspaper front pages the next day, and news channels that night broadcast live footage of the devastation to stunned audiences.

For such an iconic structure and unique story, the most effective medium to truly convey the sheer scale of the fire was video footage. And, in an industry where the pressure to get the news out fast is paramount, distributing that footage as social media news video was crucial - getting the story out to millions of people who didn’t happen to be watching rolling news channels at the time of the fire. Whichever organization could get a video of the blaze out to their social audiences first could spread the word before other outlets, and show their audiences they were the news organization to trust.

Find out which broadcaster published social media news video of the Notre Dame blaze first - PLUS, discover what impact getting the scoop had on their videos going viral. 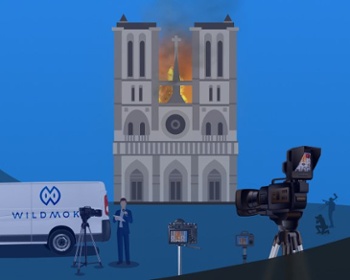